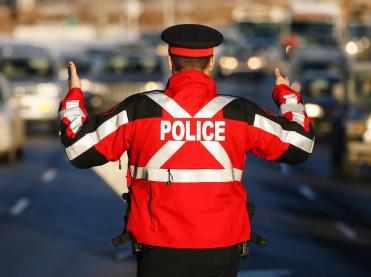 First, I want to acknowledge that I could have taken many great pictures for this post. But I didn’t. Because I’m a bad blogger.

And now that I have been appropriately reprimanded, on to the meat of the post:

DID YOU KNOW, that kids are so interested in things, that they will even create their own socially conscious field trips if left to their own creativity?

IT’S TRUE FOLKS. I have proof: a little while ago, E decided that she would like to make a thank you card to deliver to the police, and invited her brothers to participate. She just now has revealed to me that the motivation for this project was a desperate desire to see the inside of the police station. She figured a thank you card gave her an “in”. Very ingenious. I approve of these tactics.

Anyway, so the three oldest kids, E, G and L, made their cards and then pranced on over to the police station—a jaunty two blocks away—to deliver their fare.

And guys, it worked. We adults sure are suckers for cute kids. The children were offered their own personal on the spot tour of the police station. They described to me the room of files; the investigators, with whom G and L were very impressed; and the jail cell and drunk tank, with which E was very impressed, although disappointed that there were presently no occupants. Anyone who knows E will not be surprised by this.

Frankly, anyone who knows E will not be surprised by this entire story!

The children were each given their own sticker page and sent merrily on their way. And merry they were! You should have seen them skipping back home—pleased with themselves and excited by their tour. E said she felt like she wouldn’t need any birthday presents now because she had already gotten her heart’s greatest desire. All in all, a successful venture, I’d say—conceived, planned, and executed entirely by the children themselves.

One thought on “DIY Field Trip”